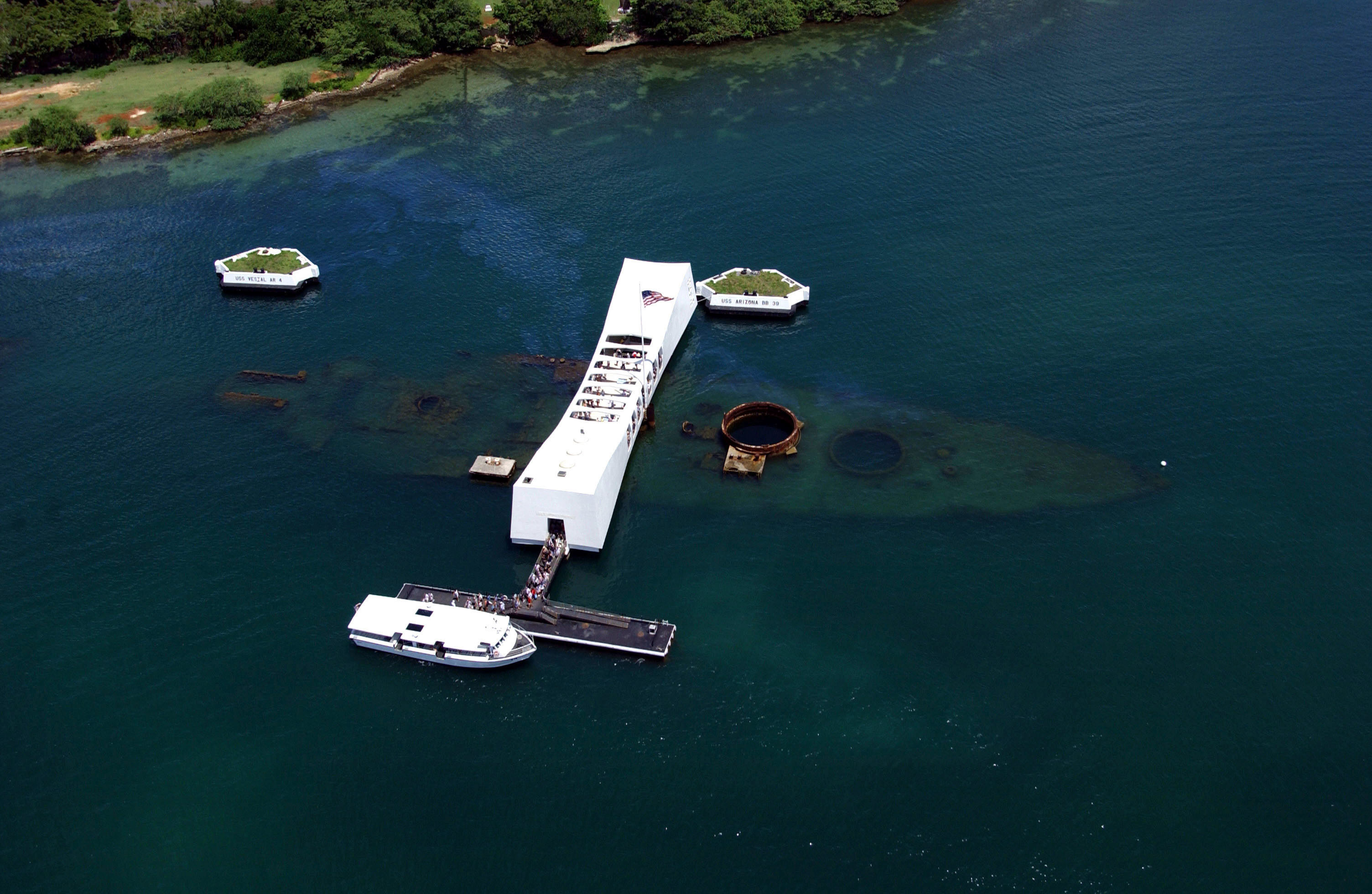 Today is National Pearl Harbor Remembrance Day and Americans everywhere are reminded of the sacrifices and lives lost during WW2 and the surprise attack on Pearl Harbor. Every year millions of people from around the world travel to Oahu, Hawaii to visit the Pearl Harbor Memorials and pay tribute to the 2,403 people that lost their lives on December 7, 1941.

Ford Island is home to four memorials, erected in remembrance of Pearl Harbor including: The USS Arizona Memorial, Battleship Missouri Memorial, USS Bowfin Submarine Museum and Park, and the Pacific Aviation Museum Pearl Harbor. During the assault on Pearl Harbor there where eight U.S. ships moored next to Ford Island in the port, this is known as Battleship Row.

Located at Battleship Row are the USS Arizona, USS Oklahoma Memorial, USS Utah Memorial, along with a memorial to a small neighborhood of civilians, that were also under fire during that fateful night. The USS Oklahoma is not the ship itself; however, the memorial does pay tribute to the 429 sailors that were killed on the ship when it went down. The memorial for the USS Utah also pays tribute to the 58 servicemen that lost their lives aboard her.

The USS Arizona Memorial, now referred to as the Pearl Harbor Visitor Center, was built in 1962 by Honolulu Architect, Alfred Preis. The memorial went on, to be established as a national landmark in 1964. This memorial was erected in remembrance and honor of the 1177 servicemen that lost their lives on the Battleship USS Arizona, when the ship was bombed just 15 minutes into the surprise attack on Pearl Harbor. Of the 1177 servicemen, 900 men were entombed in the ship, sinking with it. To this day, the sunken battleship and the entombed servicemen remain at the bottom of the Pearl Harbor where she sank, the memorial was constructed over the top of the shipwreck.

As one of the most visited Pearl Harbor memorials in Hawaii, the USS Arizona Memorial offers visitors a documentary viewing, as well as, a boat ride to the memorial where visitors are provided time to explore. According to the National Parks Service website the USS Arizona Memorial is undergoing renovations and Is currently closed, it is expected to reopen in March of 2019.

Many of Pearl Harbor’s surviving servicemen have requested, upon their passing, to be returned and buried alongside their fellow servicemen who never made it home. Survivors of the USS Arizona can choose to have their ashes interred there. While if you were a survivor of Pearl Harbor your ashes may be scattered in the water. Each service member still receives a memorial service on the Memorial consisting of a committal service, interment, rifle salute, TAPS, flag and plaque presentation. As of February 2018, 43 veterans have been interred with the USS Arizona.

The USS Bowfin Submarine Museum and Park is a 10,000 square foot museum where visitors can go a board the USS Bowfin get a feeling of what it was like on a real battleship. USS Bowfin was lunched exactly one year after the attack on Pearl Harbor, December 7, 1942. She was nicknamed the Pearl Harbor Avenger as a result of her launch date and the success she had serving in her 9 war patrols. The USS Bowfin ranks 15th, for the number of ships she sunk during her war patrols.

The Pearl Harbor Aviation Museum was opened in 2006 featuring 8 different exhibits, including an aircraft collection, hanger 37, hanger 79, collections and artifacts, Lt. Ted Shealy’s restoration shop, Ford island control tower, “You are there”, and Combat flight simulators. As visitors enter Hanger 37, a 42,000 square foot former seaplane hangar that survived the December 7, 1941 attack, they get to view a short film depicting actual historical footage from the attack on Pearl Harbor. The museum offers its visitors the opportunity to explore numerous artifacts and collections such as the WW2 planes. The museum also has a flight simulator where visitors get to sit in the cockpit of a Grumman F4F-3 Wildcat, and then they can choose a specific model of plane they want to fly. The aviation museum also offers guided tours.

The Pearl Harbor Memorials serve as an ever-lasting tribute to the 2,335 servicemen and 68 civilians that loss their lives during the surprise attack on Pearl Harbor, December 7, 1941. A date that was proclaimed by President Franklin D. Roosevelt as, “a date which will live in infamy”. These memorials remain a steadfast reminder to the lost endured by a nation and serve as a lasting testament to the heroism of the American people that rallied together to join the fight.

We hope this article was informative and has provided you, our readers, with some insight into the Pearl Harbor Memorials, that can be seen in Hawaii. We thank the servicemen, and their families, that sacrificed and fought for our great Nation during World War II; we will never forget the events that transpired at Pearl Harbor, and the lives lost. If ever given the opportunity to visit Hawaii, we encourage you to take the time to visit and experience these magnificent, and emotionally invoking, memorials for yourself.